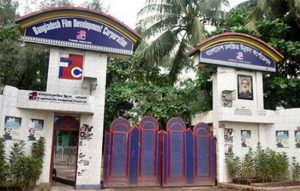 Plan a visit to the place of origin and center of the Bangla Cinema Shooting Location in Dhaka city. Know where the shooting of the entertaining Dhallywood movies are. Yes, Its Bangladesh Film Development Corporation, better known as ‘FDC’. It become the hub of Bangla Cinema in Bangladesh since the Independence But it was started functioning back in the 1955 with the most modern filmmaking facilities available then. The hub of the film making industry in Bangladesh and the largest film industry in Bangla BFDC is now struggling itself. But still it remains the only place for Film making.

It is spread over an area of 20 acres of land and has 8 enchanting outdoor locations, few cozy air-conditioned studios along with Manna Digital Complex, Digital Sound Complex, make-up rooms, Jasim Floor, Jhorna Spots and other renowned spots of shooting.

The main attraction here is real-like Sets, which include Gardens, Temples, Helipads, Fountains, Mountains, Picnic spots, Cities and Villages which are essential for film shooting. As visitors are concerned, the prime attraction is the prospect of seeing the film shooting with its famous star cast like Shakib Khan, Mahiya Mahi, Nusrat Faria, Siam and others.

Unfortunately, FDC Bangladesh isn’t open for public. A prior permission from relevant authorities and adequate contacts is required to visit the place.

HOW TO REACH FDC

From Farmgate it tooks 10 minutes to reach Karwanbazar. From The Karwanbazar Foara Circle heading towards Hatirjheel. After cross the Rail crossing The giant name plate and a beautiful gate can be seen. And this big Gate is the entrance of BFDC

The FDC has become a first choice for shooting television Commercial, big Live Shows and other entertainment-cum-education programs for various channels.